Azazel runs Orctober this year, a perfect opportunity to finish the team I failed to complete last year because of reasons. 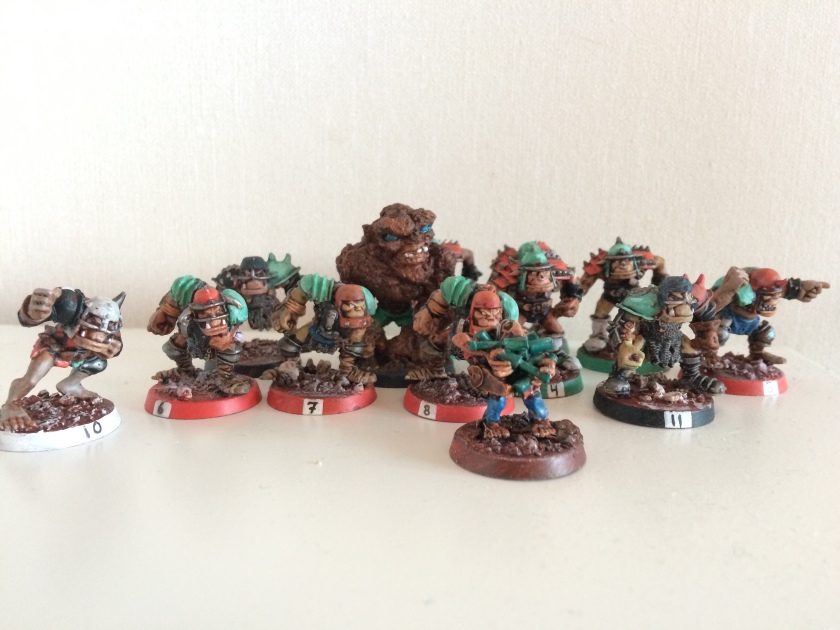 There is also a 40k grot ammo runt that serves as the Bloodweiser keg inducement.

The troll is a rock troll I sculpted in greenstuff, wanted it to have a proper Badlands vibe. 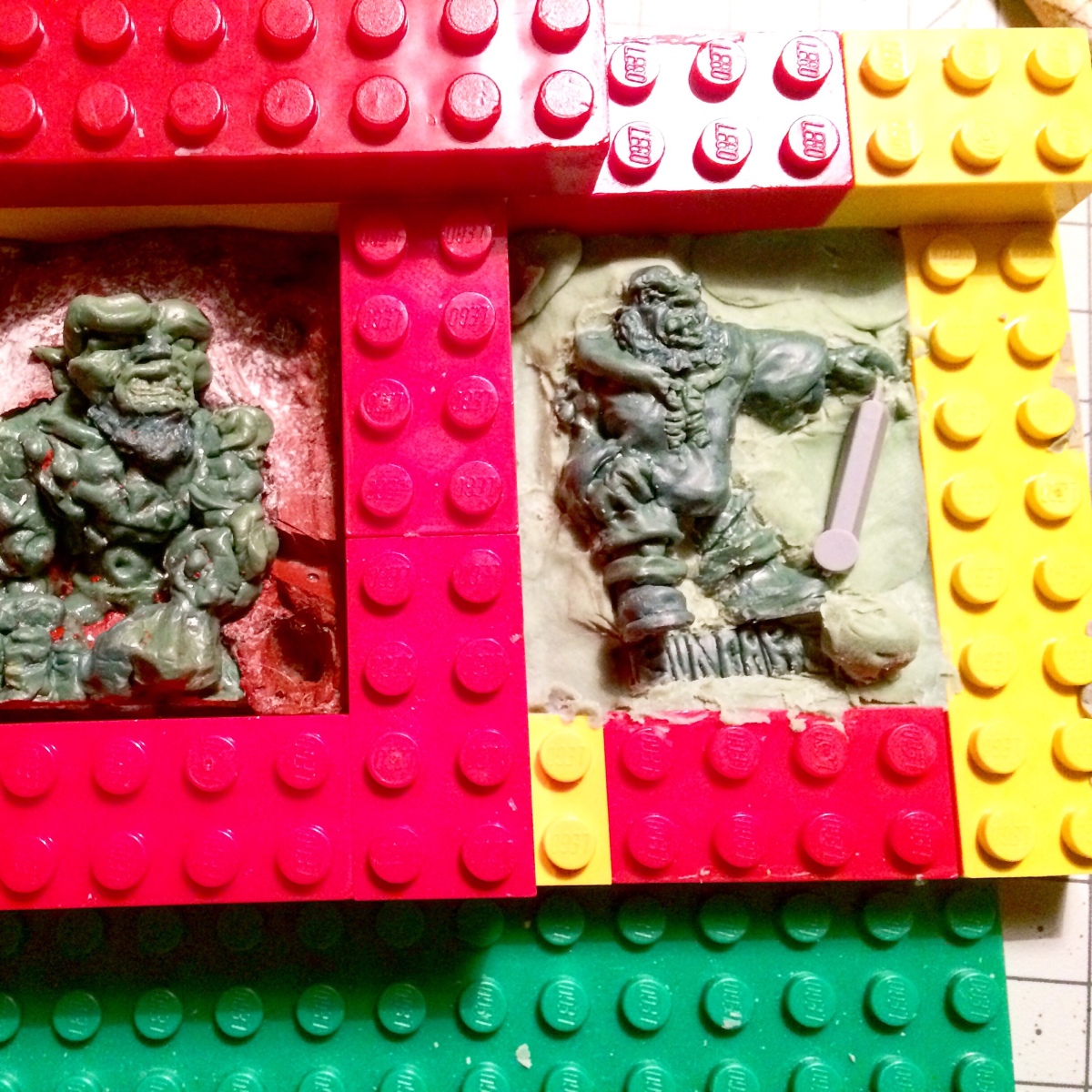 It will be awesome, bringing a Khemri team, Tsar Strucked Ohlsdorfers.

Plan to do a proper post on that team soon, here are some wip shots of my coach model, Pointy McPointface. Not nearly done, three nights left but hey; its fitting an khemri player to be nocturnal I guess. 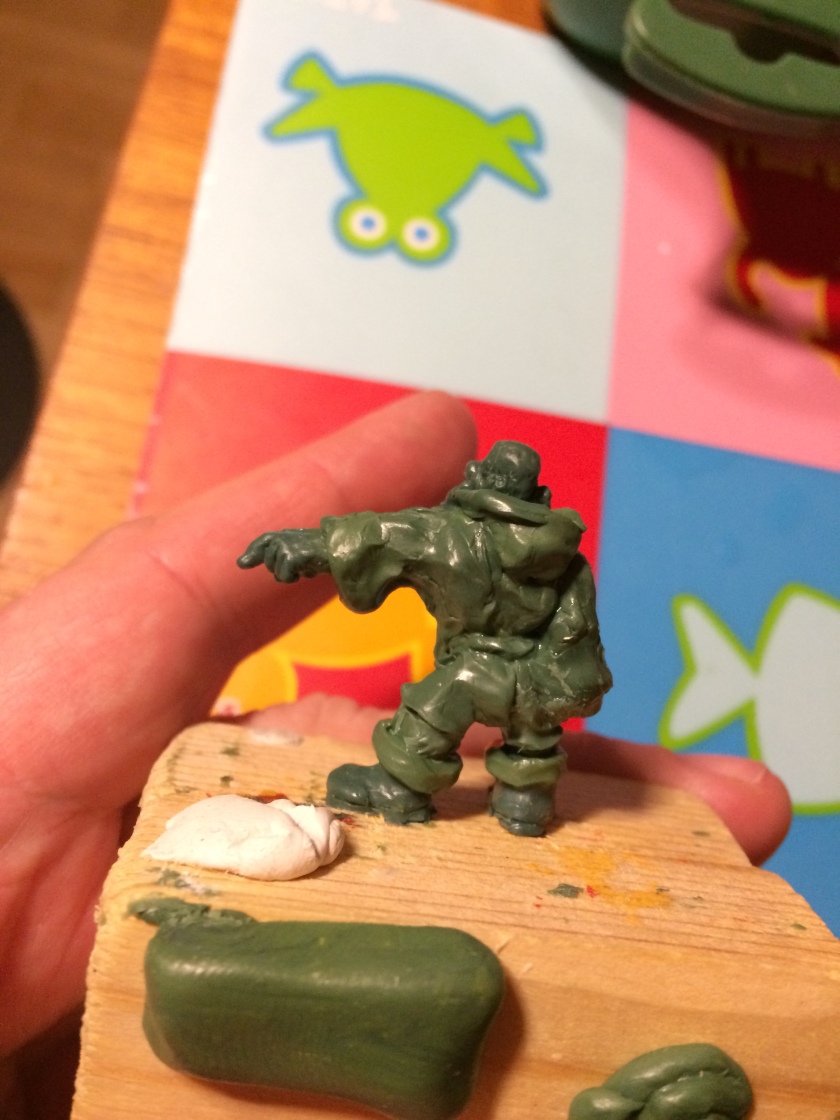 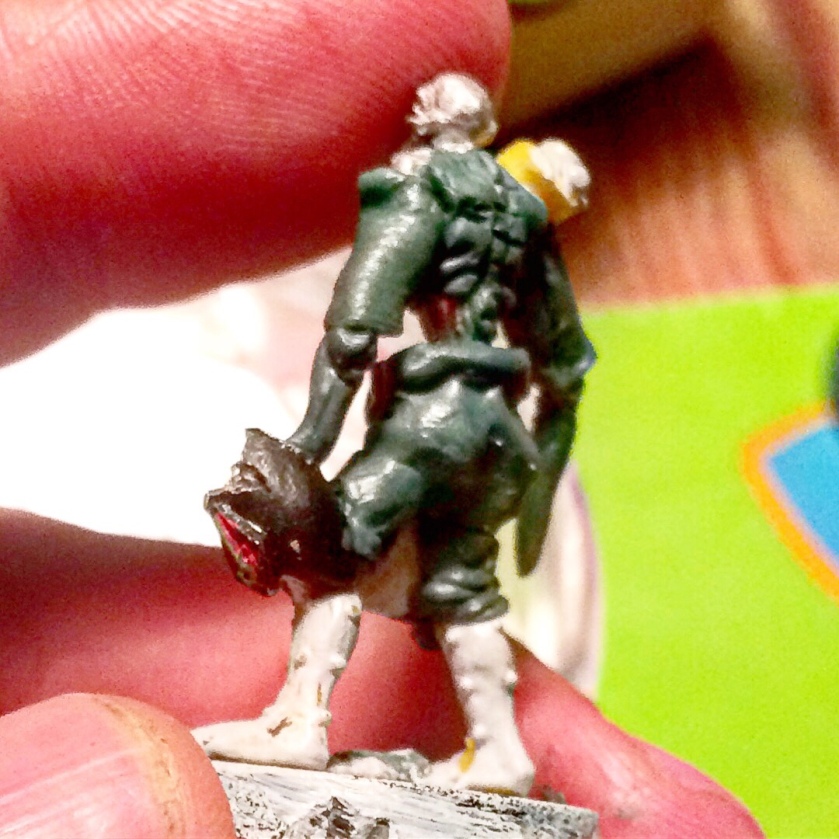 Trying out an idea here, not sure if it works. But most likely this will be my couch model for my badland rockerz team. It’s a wip, based on a two-part silicone mould clay and a bad pun. 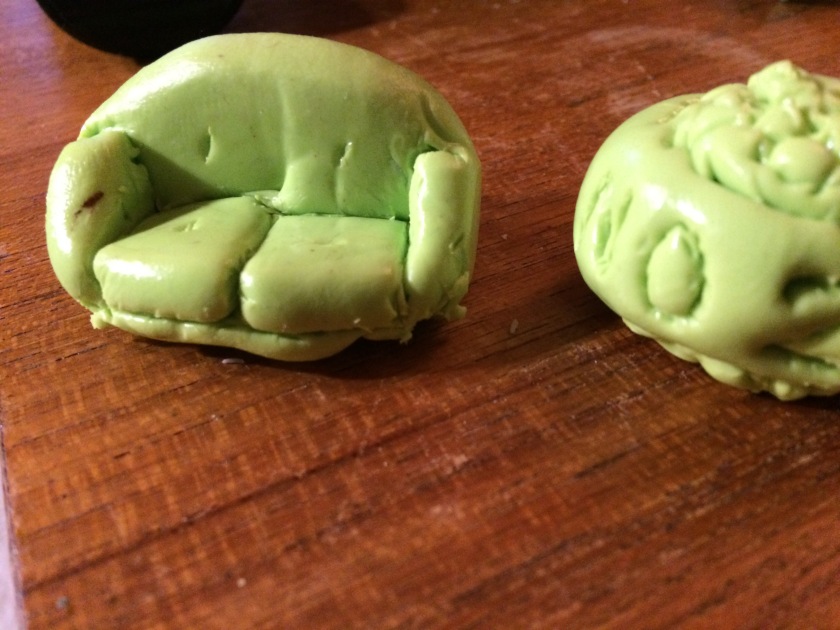 Ive also made moulds for my rock troll, in proper rtv silicone. Will try some casting in a few days when they have cured.

Apart from this, rest of stuff focuses on Necromunda. But more on that in later posts.

Part of my gitmob grots horde, led by Moonshineguzzler. When the points allow it he will probably be fielded as a shaman but as of now he’s a gitmob boss.

They are sculpted by Kevin Adams and bought via Knightmare Miniatures (a Spanish company).

Doing a 1000 pts Destruction force for an Age of Sigmar tournament this weekend.

My original plan was to do about 82 miniatures but then the new Generals Handbook came.

New plan will be an orc shaman as general, 40 grots and 3 ogors as battleline. To that i will have 3 trolls, 3 Gore gruntas and a unit of ardboyz. Plus a gobbo big boss. That makes it 61 models instead. Thats fine.

Plan is to present the units properly in individual posts but also put some of them up here already.
This is my cavalry, the general plus Gore gruntas.

Next are the Sourbreath Troggoths, not the sharpest knives in the toolshed. I call them the Stinktank. The’ve been rebased, touched up and varnished since I played with them last time.

Here is also some ogres, Mooch’s Bunch, since they are lead by the Ogre Captain Mooch. The model is Hrothyogg, the C23 ogre Captain, sculpted by Jes Goodwin. Probably my favourite ogre model. The other two are from Reaper Miniatures, part of the Bones3 kickstarter I received earlier this year. 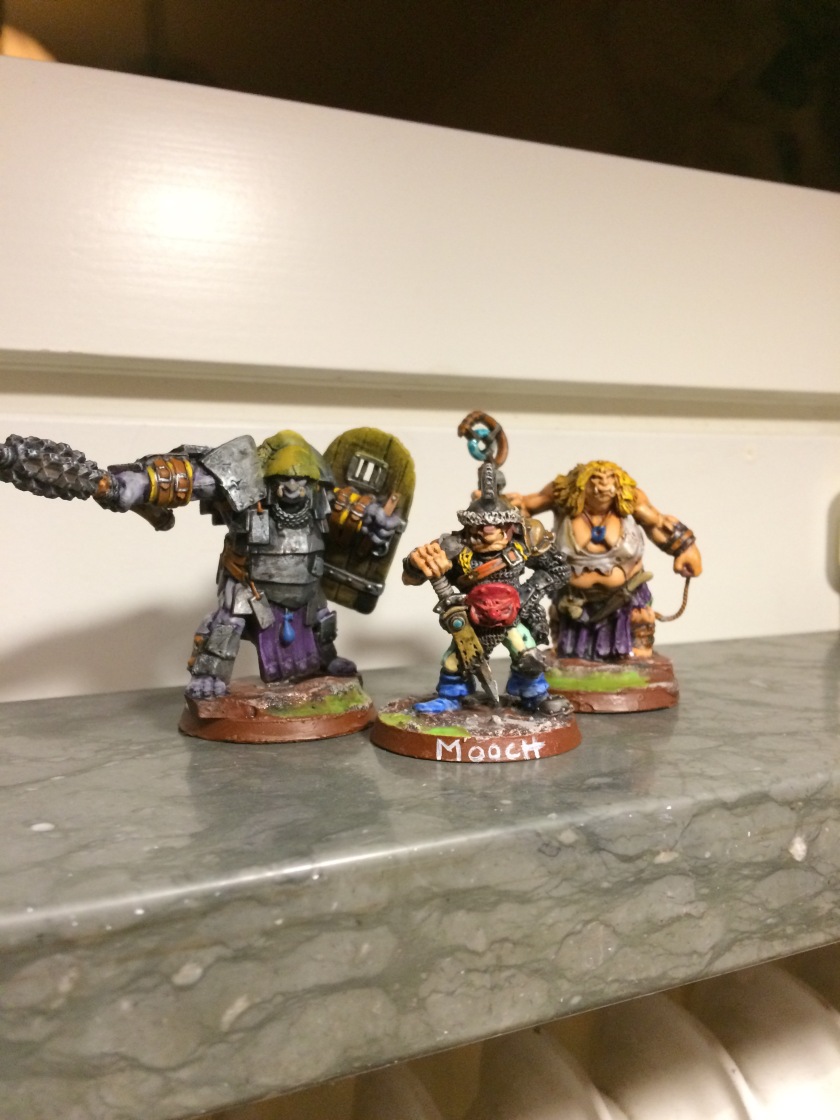 Will do proper army pics this weekend.

Feels really good about this.

These miniatures are sculpted by Nick Lund, some of them are pre-slotta but some of them have slotta tabs. They’re about as old as me some of them. Some of them are from regiment of renown’s Eeza Ugezod’s Mother Crushers, some are labelled Giant Black Orcs. They are a bit wonky and maybe not as giant by comparison to other greenskins nowadays, I do like all of them a lot.

Next up are more gobbos but soon I’ll move onto bigger pieces.

Great fun this tournament, our team even got prizes for best result in day 2. We still finished at 11th Place though out of 14 teams. Here is the results. I´m quite happy with my own record (1-2-2), it´s the best one with Ogres so far for me. Overall I think I did alright, not too many obvious mistakes. There are a few though, especially in hindsight. No need to dwell too much on it. Did some sort of a summary of the games and my opponents, here goes:

An old acquintance haven´t seen him in 15 years or so since I left my hometown and the local gaming club there. Love that with the community, being able to catch up with folks.

The game ended in a 0-0 draw, which I´m very content with. The dwarves seemed to be unable to pick up the ball throughout the whole game, while it isn´t key strategy for all players, one still needs to pick it up in order to score. Notice the deathroller/turn marker in upper left corner. It is really nice, main bulk is an old IG Sentinel I believe.

2nd vs Coma and his Undead

I won the coin toss and chose to receive, in order to do some proper ghoul bashing. Kick-off result “Pitch invasion” (where he had Fame +1) and touchback. I had two ogres and a snotling stunned, while I managed to roll 6´s on both his mummies and also a Wight. Pretty awesome, in my first round I managed to KO one of the mummies by fouling. I chose that flank to press down on. Picture is taken the end of my second round. In round 4 I ended one square away from end zone with a ballcarrying snot. To TD or not to TD? I chose to stall, feeling somewhat safe. That was unwise. The first half ended 1-0 for Coma and in the end he got another TD as well. Should´ve been another game if I hadn’t stalled. Oh well, it was really fun to play Coma again, he´s a really nice guy even though he constantly beats me on the pitch.

Meeting a coach from Bergen, really nice guy. The game wasn´t really exciting since I failed to put his players in the dugouts and he basically out-elfed me by being more agile and faster. The game ended 3-0 to bothun, I had a shot at 1-1 at one time but it just wouldn´t happen. Games like these are humbling experiences.

4th vs Drexxl and his Chaos Pact

Fun and lively, ended 1-1 but I might have been a bit too brave with my ballcarrying ogre. Trying to dodge close to the sideline, failed miserably and the ball scattered back to my endzone 10 squares to his renegade gobbo who managed to score. I did quite early remove both the skaven and the dark elf witch was tactically wise.

I´m happy with how it went. Also these marauders proved that the new AoS box is kind of perfect for making BloodBowl players.

5th vs Gote and his Goblins

Managed to cas both the fanatic and the looney quite early, Gote had three bribes but were unable to use any of them. It ended with 2-0 in TD for me and a total 7-0 in cas. He was totally outdiced in the second half and outnumbered as well but still put up a good fight for 16 turns. 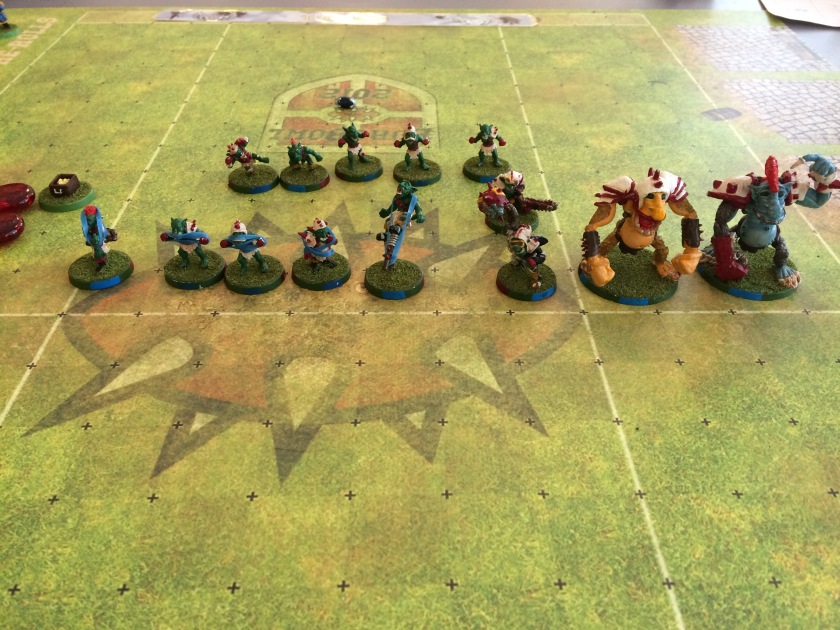 Ended up 41th out of 58 players, one touchdown from best stunty and three cas from most violent player. I´m very happy with the result. The opportunity to meet up with good friends from a lot of places and seeing teams up in close which I´ve only been looking at on the web was also really good. Also played against mostly new players (for me that is). Met Coma a couple of times before (he´s a fellow StockBowl member as well) and Gote about two years ago when i fielded gobbos and he humans I believe.

My roster was six ogres, six snotlings and two team re-rolls. It was what I could fit in 1100K build. I´ve got a free cheerleader from bringing a stunty team. Skillwise I had three doubles and five normal. Went for two break tackle, two stand firm and two pro on the ogres and diving tackle and leader for the snots. Quite happy with that skill selection, will definitely bring pro ogres whenever I can. It makes up for the bone head and really adds to the flexibility. I chose to try re-rolling a number of three-die-blocks  when already got let´s say a push but was hoping for a POW. If I really really needed the re-roll to come through I used a reroll though (for bringing down Gotes blockfanatic for instance).

Bought a 3rd edition dark elf team, need to make the second runner as well as the assassins but with these to start I have a solid foundation. They will probable be devoted to one of the more secretive of the Chaos Gods, Malal. Since his sign is a skull I do believe it could be quite fitting. More of that in another post though.

It was really nice to see the teams from nickeninja, inforthepain and tjub and to have a chat with them. The damsel/coach of tjubs brettonian themed dwarf team is looking promising! 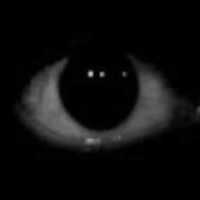 Painting and collecting Warhammer Age of Sigmar and 40k

A Book of Creatures

A Complete Guide to Entities of Myth, Legend, and Folklore

A blog about Blood Bowl : the game of fantasy football

Secrets of the void

thesuncarvault
Create a free website or blog at WordPress.com.