Came across some 40k squats recently (love those Space dorfs!), many of them with the padded armour type similar to the Dwarf team I’m working on. This one didn’t, instead he’s in a jumpsuit of sorts.

He’s from the Adventurers range and I thought he’d be a perfect mascot for “the Pears”. The background is that these dwarves are producing cider instead of beer and the team is sponsored by Strongbrow as a PR stunt.

Also fitting with something to replace the bloodweiser babe, since I’m not a fan of reproducing manschauvistic stereotypes. Really happy that it is merely bloodweiser kegs in the new edition.

Also did some markers, for re-roll counters and such. Used to be a fortification from an earlier whfb edition, I believe it was called Battle of Skull Pass. It was the core rules with some scenery and night goblins and dwarves.

Nothing fancy but really effective in my opinion.

I’ve also painted 11 snotlings since I decided to sell one of my ogre teams. Need to clear space for the miniatures in my painting que as well as the ones I havent bought yet, right? These ones were used in the team cup last spring and are slaanesh themed.

New snots. The bluerobed one could be a coach model or maybe wizard. In this new edition you might once again argue the call if you get caught fouling. It’s awesome. Since the buyer is a new player on the tabletop scene I thought I’d sort him out with a miniature for the coach as well. 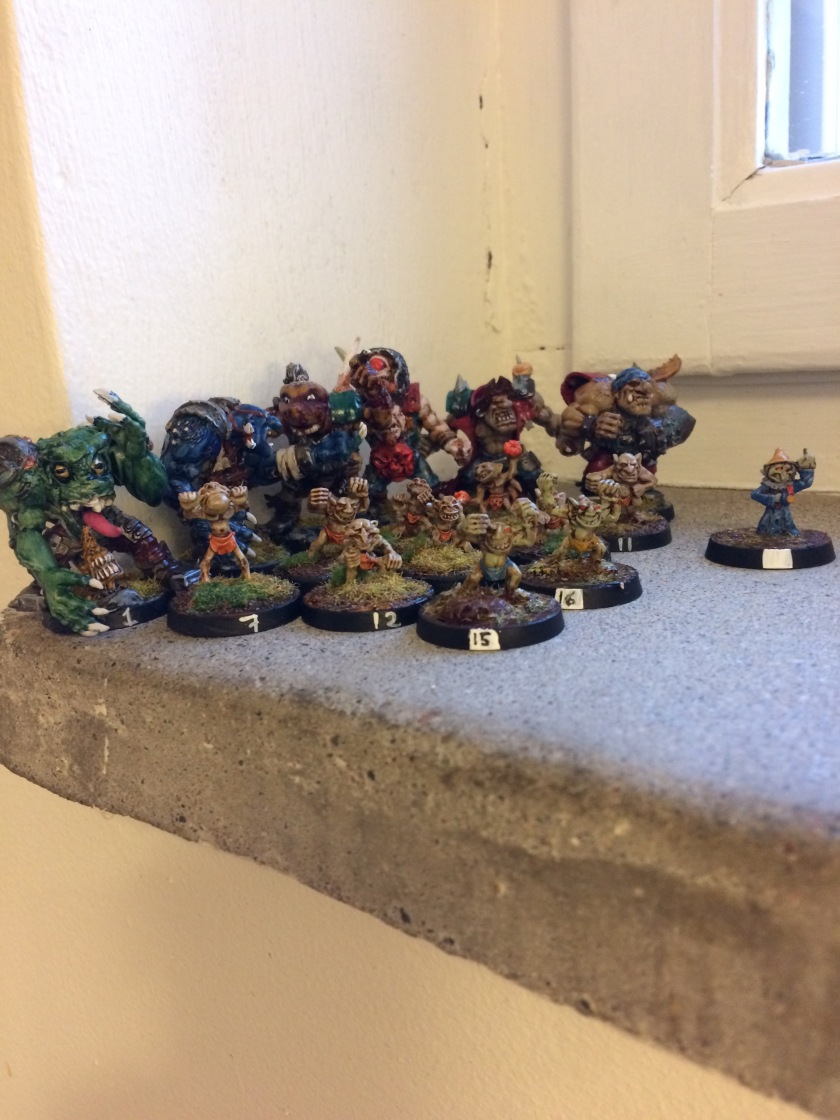 Brings painted minis up to a whooping 77 this year, which is nice. A few more on the way too, more dwarves…

Yeah, first up are two positionals for my dwarven team in BloodBowl.

The Trollslayers, “Fierce” Bossman and Dan E Gloveless, will be part of Dorf Chesthair City “The Pears”. Dan is so eager to get on the pitch so he isnt even properly dressed.

And here from the side:

The models are from Iron Golems kickstarter that finished last year and they are sculpted by the incredibly gifted Pedro Ramos. “Fierce” is supposedly the Grimm Ironjaw mini but I´m quite fond of him so I made him a permanent part of the team.

Some more reserves, bazooka and chainsaw in the piles.

Earlier WIP photos of the team. As you can see more are on the way.

And here´s the front of the box.

The painted/bought ratio is so far so good but we´ll see what happens, GW has just announced that they are gonna bring back Necromunda and BloodBowl in some form and if they are releasing anything like that I´m most likely to pick them up.
The early mock-ups and sketches they showed on their 40th anniversary (the Forge World Open Day)last week was very promising I must say. Check them out here!

Painting and collecting Warhammer Age of Sigmar and 40k

A Book of Creatures

A Complete Guide to Entities of Myth, Legend, and Folklore

A blog about Blood Bowl : the game of fantasy football

Secrets of the void